On February 12, 1918, the student residents of Main Building were seated at dinner when the fire alarm rang. The girls filed outside quickly and calmly, obeying the procedures for what they thought was a drill. Within a few minutes, smoke began rising from the back of the building, and then, suddenly, part of the roof burst into flames. The Poughkeepsie Fire Company was on the scene ten minutes later.

The Vassar community and the Poughkeepsie Fire Department quickly took action to save their beloved building from the devastating flames. The firemen chopped a hole into the ice covering Sunset Lake to secure a water source. Other firemen went into the building, throwing personal effects from student rooms down to the waiting groups of girls below. The students formed chains from Main to Rockefeller Hall, passing the goods along the line for safe storage in the classrooms. Student volunteers rescued furniture and records from the offices housed in the building. The determination and strength of the girls on that night became legendary: an anonymous poem in the February 16th issue of the Miscellany News commemorates the event: 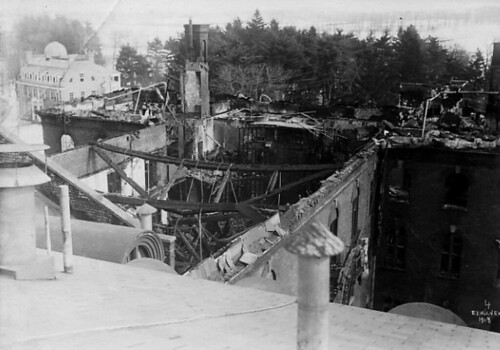 A view of the destruction

A filing case of steel it was
Four maidens bore it on
They said with nonchalance, Some load!
And dumped it on the lawn.
Then Prexy called three stalwart men
(He thought ‘twould be a cinch)
But when they tried to move it in
It wouldn’t budge an inch!

The students also formed a Relief Committee to assist those who had been affected by the fire. Each dorm took in refugee Mainers until their rooms could be deemed safe, and girls who were able to move back into their Main bedrooms continued to eat in their surrogate dorms until the Main kitchen was rebuilt. Off-campus faculty and Poughkeepsie neighbors of the college also housed students. The relief effort was so well-organized that classes resumed the next morning, February 13th. Groups of girls took shifts organizing loads of personal belongings and clothing for identification and retrieval, sorting mail, and receiving and transmitting telegrams.

The fire began in a defective flue in the kitchen, where the staff were preparing steaks for dinner. The flue led from the broilers to the maids’ quarters in the rear wing, and the fire spread upwards and smoldered for a while before a maid on the fourth floor noticed and rang the fire alarm. A brick firewall separating the rear wing from the main body of the building stopped the fire from spreading, and thus the damage was not as disastrous as it could have been. Most of the students lost very little, and the total damage was estimated at $165,000, most of which was covered by insurance. The maids, however, were not so fortunate; most lost everything they owned to the fire. An emergency fund was quickly set up and a fundraising dance planned for the next weekend, and each maid was given $10 cash and a spare set of clothes immediately. Temporary housing for the 75 displaced staff was set up in the Gymnasium.

President Henry Noble MacCracken, who had rushed back to campus from New York City after receiving a telegram stating simply that Main Building had been destroyed, praised the Vassar and Poughkeepsie communities for their quick-thinking and teamwork, without which the losses from the fire would have been much worse.