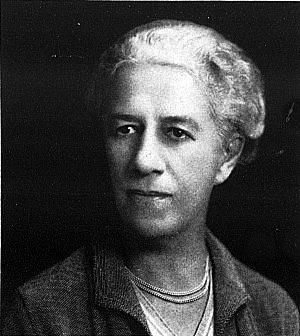 A consummate student and heralded classicist, Elizabeth Hazelton Haight ’94 was an important part of Vassar from the time of her matriculation in 1890 until her death in 1964. Described in the New York Times at the time of her death as a “great and gracious woman” who was the “master of every situation she encountered,” Hazel, as she was known to her friends, was, said the Times,   “regarded at Vassar as one of the last of her era of outstanding women who dedicated their lives to the college.” Vassar embodied Haight’s two great passions: liberal arts education for women and the classical tradition. She believed that both in combination could lead to a “balance for life,” a goal she sought for all her students.

Born February 11, 1872, in Auburn, New York, to John W. Haight, a merchant, and Helen Meeker Haight, Hazel attended Auburn schools before matriculating at Vassar in 1890. An outstanding student, she graduated with academic honors including membership—retroactively, when, in 1899, the first chapter at a women’s college was established at Vassar—in Phi Beta Kappa. While studying Homer, Herodotus, Thucydides, Lycias, Demosthenes, Sophocles, Aristophanes, Plato, and Aristotle she also took a seminar course along with classes in style and Shakespeare. She showed a love for poetry and composed many poems, some of which appeared in the Miscellany News. In her senior year, Hazel edited the Vassarion and served as her class’s commencement speaker.

After receiving her B.A in 1894, Haight took her only extended absence from the college for the rest of her life, teaching in New York at the Rye Seminary School in Rye (1894-1895), at the Emma Willard School in Troy (1895-1900), and at the Packer Collegiate Institute in Brooklyn, (1900-1901). In 1899, she received a M.A from Vassar in absentia; her thesis was entitled Conditional Sentences in the Iliad and the Odyssey. Hazel returned to Vassar after the eight-year absence in 1902 as an instructor in classics. She received her Ph.D. from Cornell in 1909 with a dissertation on The Sea in Greek Poetry. On March 8, 1910, she became an associate professor with a salary of $1500.

Haight’s early years as a professor set the tone for her future. In the summer of 1913, she travelled with a group of students to Greece and Italy as part of a classics department trip. She returned to this region almost every other summer during her time as a professor. In 1914, she became chairman of the publicity committee of the Alumnae Council. That next year, Hazel and Vassar’s third president, James Monroe Taylor, published Vassar, the first comprehensive history of the college and the fourth volume—after those of Columbia, Princeton, and Harvard—in the Oxford University Press American College and University series. In 1916, she edited The Autobiography and Letters of Matthew Vassar, her second seminal work on the history of the college.

During World War I, Hazel was chairman of the Faculty Committee on War Activities, coordinating Vassar’s commitment to the war effort. She believed that Vassar, and women in general, were vital to the country’s fight to protect democracy. She continued her writings on the college, publishing Life and Letters of James M. Taylor in 1919, and a booklet on the 50th reunion, in 1920, of the Class of 1870. In 1922 she became a full professor and delivered the faculty address at Convocation. This year also E. P. Dutton published her acclaimed scholarly work, Italy Old and New, which was dedicated to her Vassar colleague, Professor of Italian Bruno Roselli.

Through the 1920s and into the 1930s, Haight established herself in both the college and the academic world. In 1923, she became chairman of the classics department and curator of the Classics Museum. This trend continued in the wider scope of academia, as in 1927, Haight was “elected chairman of the Advisory Council of the American School of Classical Studies in Rome…[and was] the first woman to hold the office…” Later that year she embarked on an epic trip to North Africa in which she took many stunning photographs that were later displayed at the school. As her prestige continued to grow, she received a summer appointment to lecture at the University of Chicago in 1931. In perhaps her greatest achievement as an academic, she became the first woman to be elected president of the American Philological Association. The college threw a party in her honor on April 12, 1934.

In 1935, Haight once again ventured to Greece and Italy, and this time, received a grand reception from both the King and Queen as well as Il Duce Benito Mussolini. She met Mussolini at Renaissance Hall of the Palazzo Venezia and presented him with books about Italy written by the Vassar faculty. She talked to Il Duce extensively, focusing on recent archeological discoveries and the government’s plan for continued archaeological work. Haight was impressed by his dynamic personality and powers of concentration that she believed to be “part of the secret of his achievement.” (AAVC) She also purchased many antiquities for the Classics Museum.

In 1941, Hazel gave a second Convocation address, “Education for Service.” She began by discussing heroines in Greek plays and espousing their importance as figures of “new freedom” (AAVC) and paralleled this idea with the opportunities available at Vassar that provided the students with the tools necessary to lead an empowered life. She urged that Vassar students should use their limitless opportunity and become something more than “privileged princesses”; they should look for meaning in life and affirm the greatness of mankind. This speech reveals how Haight saw Vassar and the classics as equal partners in molding young women into strong citizens of a republic and of the world.

In 1942, Elizabeth Haight retired as an active professor. A statement from the Vassar trustees, said “Professor Haight’s life illustrates the theory that the true scholar can live and thrive in a residential college, maintaining a worldwide correspondence with her colleagues in scholarship, and influencing the teaching of her chosen field throughout the continent. The Trustees congratulate Miss Haight upon her great achievement and pledge themselves to the maintenance of the academic standards of which classical culture has for so long been the mainstay.”

In addition to these remarks, members of the Latin and Greek departments and other friends donated a Terracotta mask of a Silenus to the Classics Museum in her honor. Haight remained a member of the Vassar community, as she continued to participate in campus life and reside in nearby Williams House.

Although she had retired from Vassar, Hazel was not inactive. She published essays on Greek romances in 1943 and 1945, delivered a speech, “Lucian and His Satiric Romance,” at the New York Classical Club on February 6, 1943, and published a study of her close friend and student, Edna St. Vincent Millay ‘17, “Vincent at Vassar,” a few months after the poet’s death in October 1950. The essay, which appeared in Vassar Quarterly 1951 and was later published as a brochure, detailed the rebellious poet’s life and personality as a student as well as their close personal friendship. Hazel originally met Vincent when she tutored her in Latin the summer before she came to the college in an effort to help her skirt Vassar’s strict entrance requirements. Through her years at Vassar, Vincent and Haight remained close, and Vincent would often confide in Haight. Their relationship was eventually so close that Vincent referred to Haight as Elizabeth, although “not in class.” Haight felt “that there was no boundary of age between us.”

Towards her later years, Haight began to slow down her prolific pace, but she did deliver a memorable speech at Founders Day 1952, “The Founders and Three Cheers for Matthew Vassar’s College.” In this address, she declared that Matthew Vassar would be happy with the current state of the country while also asserting her continued belief that education played a vital role in this achievement. Professor Haight died on November 16, 1964, at McClelland’s Nursing Home in Beacon, New York. Her funeral was held at the Church of St. John the Evangelist in Beacon. She was 92 years old.