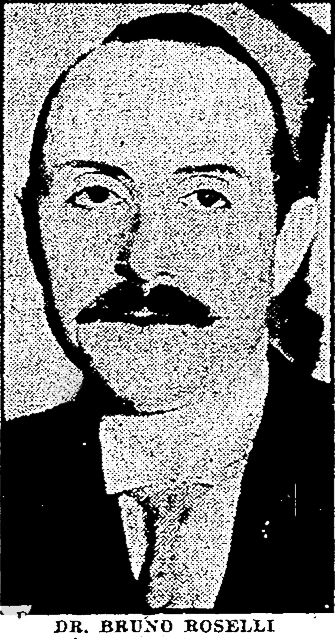 In 1907, a twenty-year-old Italian disembarked a large ocean liner in New York City; he wore a money belt full of gold coins and, perhaps, a wide grin. Bruno Roselli spoke very good English—his mother had taught him—and he knew exactly where to go when the ship docked. Heading straight for the office of Henry Marcus Leipziger, the supervisor of lecturers for the New York City Board of Education, Roselli told Leipziger who he was and who had sent him to New York, and Leipziger promptly offered him a lecture tour.

Why was it so easy to find this job? How did he know to seek out an obscure, but well-placed bureaucrat? And where did Roselli get the gold coins? These are three of many questions in Bruno Roselli’s story, a blurry, fascinating tale that teems with mystery. His extracurricular activities raise suspicion, but that Roselli taught Italian—eventually at Vassar—between 1919 and 1933 remains unquestioned.

Roselli was born in 1887 in Florence to a father who worked for the Italian government as a lawyer. In the early 1900s he graduated from the Liceo Galileo in Florence—apparently, without taking any examinations. One of his brothers became a lawyer, and in 1911, he too earned a law degree from the University of Urbino. That same year, he began teaching Italian art, literature and language at Adelphi College in Brooklyn.

In his free time, Roselli gave the lectures that Leipziger arranged. Among the several new speakers for the upcoming lecture season announced in The New York Times for September 28, 1912, was one Dr. Roselli, who would speak on “Art.” His first lecture, “Assisi: The Town of St. Francis,” on October 24 at Public School 46 on 150th St and Saint Nicholas Ave. was the first “in a course of six lectures on ‘Italian Towns: Their Art and Their Romance.’ ” By 1915, Roselli was helping found the Italian Teachers Association, serving as vice president of the new organization. These academic activities continued, but they may have served another purpose: allowing him to speak to Americans about the distressed state of Italy and sway public opinion in favor of US intervention in battle-weary Europe.

After briefly returning to fight for Italy in the First World War—he witnessed the gory defeat at Caporetto in the fall of 1917—Roselli reappeared in America later that year, signing a long-term engagement with a lecture agency to tour 40 states and Canada. His purpose—or, perhaps, assignment—was promoting the Italian cause everywhere he went. Roselli’s public lectures often noted the merits of the rising fascist ideology championed by Benito Mussolini. At an October 1919 gala at the Metropolitan Opera House, for example, where, according to The Times, the secretary of the Italian War Relief Fund, Mrs. William Vanamee, “made a plea on behalf of the 185,000 war orphans in Italy,” “Italy’s part in the war was outlined by Lieutenant Bruno Roselli.”

Roselli, it seems, often found friends in high places. As one stay in the country was drawing to a close, after meeting him at a routine pro-Italy speech at the University of Virginia, an impressed auditor, a professor who happened to have been a schoolmate of Woodrow Wilson, asked the President to find a way for Roselli to stay in the United States longer. Wilson contacted the Italian ambassador, and the matter was settled. Another such friend was Julia Cuniberti, an American cultural attaché to Bologna and a Vassar graduate in the Class of 1917. When Edith Fahnestock, the departing chair of Vassar’s Spanish and Italian department, sought a new Italian teacher, she turned for recommendations to Cuniberti, who turned to Roselli for advice. Roselli, it seems, recommended himself for the position and easily attained it. And, since he claimed to still be on active military duty, in the fall of 1919 Professor Roselli arrived on campus in the uniform of the Italian army.

At Vassar, Professor Roselli was highly successful from the start. The influential professor of Latin Elizabeth Hazelton Haight ’94, who became a good friend of Roselli, praised his Italian classes, noting his refusal to bring up the topic of Italian politics in them. The students seemed to like him a great deal, and enrollment in Italian classes rose steeply. An infrequently elected language, Italian had been relegated to sharing departmental status with Spanish. But Roselli separated the two languages into their own departments and ushered in a new era in Italian at Vassar. By the early 1920s, Vassar could boast of the largest Italian enrollment of any American college, and in 1921 Roselli hired an assistant instructor in Italian, a woman from Genoa named Gabriella Bozano.

In 1922, Prime Minister Mussolini bestowed honors on Roselli for his service abroad, and King Victor Emmanuel III praised Henry Noble MacCracken, Vassar’s president, for fostering the learning of Italian in America. The Italian leadership, it seems, felt very proud of Roselli and the work he pursued in Poughkeepsie.

Vassar’s Professor Roselli was, it seemed, everywhere. In 1925, he garnered brief press coverage with an extravagant archeological assessment of a bust of Augustus Caesar, dredged up from the Hudson River. According to Roselli, The New York Times explained: “The head of Augustus was part of a statue that came from the old Roman city of Leptis Magna”; it “had been removed from Tripoli to this country by Captain Porter of the United States Navy as a souvenir of Decatur’s triumph over the Barbary pirates” in 1805. Following Roselli’s attribution, The Times speculated that Augustus’s severed body “may still be in the bottom of the Hudson River abreast of Rector Street.” A few days later, however, a New York socialite offered a more plausible provenance, recalling a childhood nursery rhyme about “Julius Caesar at the bottom of the Hudson” and attaching it to the loss in a ferry sinking around 1830 of four ancient sculptures en route from Manhattan to the New Jersey collection of her grandfather.

The peripatetic professor and his activities drew the notice of Cornelia Raymond ‘83, daughter of Vassar’s first president, John H. Raymond. A member of the college warden’s staff. Raymond observed that, detesting Poughkeepsie winters, Roselli escaped to Florida during school recesses. And, attempting to explain this extravagance, Raymond suggested that Roselli received an extra salary to finance his exploits in America—perhaps from the Italian government itself.

While his first lecture at Vassar, in October 1919, was moderately titled, “A Word from Italy, America’s Silent Partner,” the speech stressed the foul treatment Italy had borne at the Paris Peace Treaty. The Miscellany News reported, “Lieut. Roselli asked us not to form our own opinions immediately, to read as few editorials in New York papers as possible, to ask ourselves why we only hear one side of a question.”

His rhetoric grew more political as Roselli grew more secure and comfortable at Vassar and as Mussolini succeeded in Rome. In a paean to the victorious Fascists in the Miscellany News on November 18, 1922, he extolled the virtues of the new ruling party. “They are lovable boys in spite of all their fierceness, these ‘Camicie Nere,’ ” he wrote. “They are young, and therefore their musketeerish methods strike no false chord.”

Further evidence of Roselli’s working for the Fascists emerges in a 1920 New York Times report of the remarks at the New York Vassar Association’s annual luncheon of “Professor Bruno Roselli, Italian exchange professor at Vassar, sent by the Italian Government to lecture here.” Sharing the podium with former United States Ambassador to Turkey, Henry Morgenthau and President MacCracken, Roselli implored American women to stay alert and informed about politics and international affairs, urging them “not to forget the lessons learned during the war, and not to return to the slothful ways considered right prior to 1914.”

Invited in 1930 to speak at a conference in Vancouver, British Columbia, Bruno Roselli notified President MacCracken that he would be absent and would hire a substitute while he was away. This he had done many times before, but the practice apparently had begun to irk MacCracken, who denied him permission to leave the campus. MacCracken’s denial outraged Roselli, who attempted to call the president’s bluff by submitting his resignation to MacCracken and to the Board of Trustees, imagining that the board would not dare let go of such a treasure and would thus humiliate MacCracken by overruling him. The board, however, accepted his resignation. Roselli left Vassar in 1932, embarrassed but not yet defeated.

Following his rough departure from Vassar, Roselli continued to lecture where he could, but his right-leaning ideas encountered more and more resistance as the United States edged toward entering WWII. In 1939, for example, University of Chicago students attending one of Roselli’s lectures heckled him with chants of “Fascist!” and refused to listen. “I am a student of Fascism, but no Fascist,” Roselli responded. An article in The New York Times entitled “’I’m No Fascist’ A Hardboiled Prof Tells U.C.” reported that Roselli bet $1,000 that Dr. Ernest B. Price, director of the university’s International House, “and the rest of the Midway campus together couldn’t prove in thirty days that he—Dr. Roselli—is or ever was a member of the Fascist party.” Roselli cunningly dared his detractors to match his bet, at the risk of either party being charged with libel, an offense for which he could be deported, “as I will be if convicted of failure to report being a foreign agent.” Here, Roselli addressed head-on the growing rumor that the he was in fact “a paid agent of Fascist Italy,” as The Times phrased it.

In 1940, seeing that the United States would not enter the latest war on the side of Italy, Roselli left America, ending up in Argentina, where he founded another Italian department—at Universidad de Cuyo in Mendoza. By the 1950s, he was teaching art history at the University of San Marcos in Lima, Peru, where he apparently shunned political propaganda, opting instead to lead a movement to preserve the city’s historic balconies. One of his students in Lima, the future Nobel Laureate in literature, Mario Vargas Llosa, dedicated his 1993 play, El Loco de los Balcones to Roselli. In the play, a character named Aldo Brunnelli seems eerily similar to the playwright’s erstwhile Italian teacher.

Lima was the final resting place for this “knight commander of the crown of Italy,” “student of Fascism,” ambitious sycophant, lover of words, and proud Florentine. He shut his eyes for the last time in 1970, at the age of 83.

For this article the author is indebted to the scholarship, curiosity, instinct and kindness of Professor of Italian John Ahern, without whom this piece would not exist. His relentless research into the life of his mysterious predecessor in the Vassar College Italian department attracted the attention of the VC Encyclopedia staff in the Spring of 2013, and the author’s subsequent interviews, conversations and e-mails with Prof. Ahern serve as the bedrock for this article. The Bruno Roselli story remains unfinished, and should Ahern unearth any further clues about the incorrigible Italian, the author will dutifully include them here.

Other sources consulted are: