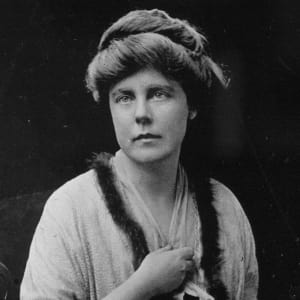 Co-founder for the National Woman’s Party, Lucy Burns ’02 was a leader of the militant-wing of the women’s suffrage movement. Known for her vehement fight for women’s right to vote and her resilience under opposition, Burns is also remembered as one of the early trailblazers in the movement for gender equality. Lucy was born on July 28, 1879 in Brooklyn N.Y. to Edward and Ann Burns, the fourth of their eight children. Her parents supported equal rights, encouraging both women’s education and suffrage, and they later ignited her passion for women’s rights by introducing her to the cause at the age of 12. A bank president, her father ensured that his daughters received excellent education from an early age. Following in her sisters’ footsteps, Burns graduated from the Packer Collegiate Institute in Brooklyn in 1899.

In September of the same year, Lucy Burns began her study at Vassar College. Although her concentration is unknown, she frequently took English and Economics classes, as well as languages including Latin, Greek, French, and German. Lauded as a gifted student by her professors, she graduated in 1902. During her graduation, Burns was the senior spade orator of her class, responsible for passing to the incoming seniors the spade used by Matthew Vassar to break ground for the construction of Main Building. Graduating classes buried their class records under their class tree upon graduation, and the remarks by the departing “orator” were often more witty than kind.

In the early 1900s, Lucy oscillated between various graduate schools and teaching English. From 1902 to 1903, she enrolled at Yale University. She then briefly taught at the Erasmus Hall School in Brooklyn. In 1906, she resumed her education, studying linguistics at the Bonn and Berlin Universities until 1909. She later enrolled at Oxford to continue linguistics, but didn’t finish her degree. While still in Berlin, Burns had visited England, where she met Emmeline Pankhurst, the prominent and militant suffragist who founded and led the Women’s Social and Political Union (WSPU). Galvanized by the passionate leadership of Pankhurst, she left her graduate studies and enrolled in the WSPU as the union’s organizer for Scotland from 1910 to 1912. Her heated protests led to frequent arrest for disorderly conduct.

It was in a London police station that she met Alice Paul, her future partner in founding the National Woman’s Party. The two Americans quickly struck a close friendship based on their mutual criticism of the American suffrage movement’s organization. During their in England, they often joined force with protests. In 1909, a New York article, “Two Americans in Guildhall Exploit,” reports on their coordinated assailment of Winston Churchill., Paul had thrown rocks at a window during a banquet while Burns sneaked inside the hall and accosted the then Member of Parliament. Waving a banner in front of him, she shouted, “How can you dine here while women are starving in prison?”

Lucy Burns returned to the United States in 1912 to advocate for the American woman’s right to vote. Along with Paul, who had returned to the United States in 1910, Burns joined the National American Woman Suffrage Association (NAWSA). As leaders of NAWSA’s Congressional Committee, the two began to organize protests and issue statements to the media calling for women’s suffrage. By 1913, they had severed ties from NAWSA and formed the Congressional Union for Women’s Suffrage (CU), which called for a constitutional amendment for women’s suffrage.

In 1916, Paul and Burns transfigured a branch of the CU into their own National Woman’s Party (NWP). Radical and militant, the NWP called for a constitutional amendment that would ensure women’s suffrage throughout the entire United States, while the more popular NAWSA lobbied for state-level referenda. Lucy was active in the NWP from its foundation until the ratification of the Nineteenth Amendment in 1920. Her main responsibility was as legislative chairman in Washington, D.C., but she also organized the Western campaign for suffrage and edited The Suffragist, the organization’s weekly journal.

Known for her fiery temperament and charismatic speeches, Lucy Burns was admired and respected by her fellow members such as author and journalist Inez Haynes Irwin, who described Burns in her history of the NWP, The Story of The Woman’s Party (1921): “She is a woman of twofold ability. She speaks and writes with equal eloquence and elegance. Her speeches before Suffrage bodies, her editorials in the Suffragist are models of clearness; conciseness; of accumulative force of expression. Mentally and emotionally, she is quick and warm. Her convictions are all vigorous and I do not think Lucy Burns would hesitate for a moment to suffer torture, to die, for them. She has intellectuality of a high order; but she overruns with a winning Irishness which supplements that intellectuality with grace and charm; a social mobility of extreme sensitiveness and swiftness.” “In those early days in Washington,” Irwin said, comparing Lucy to Alice Paul, “with all her uncompromising militantism, Lucy Burns was the diplomat of the pair; the tactful, placating force.”

Burns’ fervent protests led to her frequent arrest. She spearheaded the campaign against President Woodrow Wilson, demanding that he ratify suffrage. Beginning in January 1917, she organized daily picketing of the White House. In June, she held up a banner, addressed to visiting Russian envoys, in front of the White House that declared America was deceiving them and was not a democracy because President Wilson denied women the right to vote. The message angered the President, and Burns’s arrest later in the month when she held up a similar banner was the beginning of a long series of suffragist arrests.

Of all of her fellow suffragists, Burns spent the most time in prison. She was a prominent figure in one of the most infamous events in the NWP’s history: the November 15, 1917 imprisonment in the Occoquan Workhouse in Virginia, which would later be called “the Night of Terror.” Burns and other NWP members had been jailed for their White House picketing. As it was her third arrest, Burns was given the maximum sentence of six months. Upon arriving at the prison, the suffragists went on a hunger strike, declaring themselves political prisoners–the NWP’s common procedure upon arrest.

In response, the guards brutally beat and terrorized the women in order to force them to eat. When Burns refused to stop calling roll to confirm that the women in the other cells were not badly injured, the guards handcuffed her arms over her head for the whole night. In solidarity, her fellow suffragist Julia Emory held her arms over her head until she was released. Burns was later violently force fed and held in solitary confinement. Her resilience during the November 1917 imprisonment would later define her career in the NWP. After the workhouse, Burns returned to advocating for suffrage. She toured the nation, giving speeches, and continued to picket and be arrested. When her dream of women’s suffrage was finally achieved in 1920 with the Nineteenth Amendment, Burns retired. A report quoted her saying, “I don’t want to do anything more. I think we have done all this for women, and we have sacrificed everything we possessed for them, and now let them fight for it now. I am not going to fight anymore.” She moved back to Brooklyn to care for her orphaned niece and devoted the rest of her life to the Catholic Church. Lucy Burns died at the age of 87 on December 22, 1966.