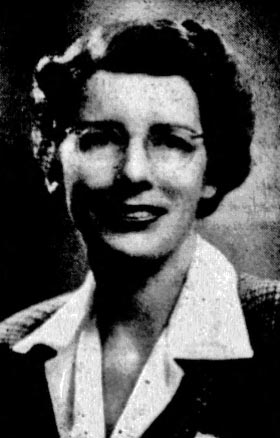 “Though it was a far cry from her original plans,” said an article about Gert Garnsey in The Miscellany News in 1944, “her work has had its adventures.”  “One could say,” the article teases, “she was vaguely involved in a murder and one could say that she…roomed with a former editor of the Misc and lived over a speakeasy. From teaching in the Orient to pacing the slums of New York to checking real estate in Des Moines, Ia., to dabbling in the fine arts in Boston, and back again to the collegiate air of Poughkeepsie, Miss Garnsey is content with her work.”

Gertrude G. Garnsey was born on August 3, 1904 in Seneca Falls, NY, to Hamilton Garnsey, a banker, and Elizabeth Guion Garnsey.  Her brother, Hamilton, Jr., went to Cornell and Gert, as her family and friends called her, attended Mynderse Academy—where she was president of her class—before coming to Vassar in 1922. At Vassar she majored in economics and completed a minor in psychology.  Outside the classroom, Gert was on the track and field hockey teams, and at the close of her sophomore year, in June 1924, she served as a page at the dedication ceremony of the Alumnae House, a building that would loom large in her adult life.

In her senior year, Gert was appointed student chief justice, often the only student member of judicial hearings. A 1925 Alumnae Council report gave a glowing review of her work:

“She made a favorable impression and seemed to justify the increasing confidence that the faculty is placing in the student body…Her sense of responsibility and her pleasant sense of humor were delightful. Any doubt I may have had as to the wisdom of the emphasis that is being placed on youthful responsibility was entirely dispelled.”,

After her graduation in 1926, Garnsey taught English at Vassar’s sister school in Japan, Tokyo Joshi Dai Gaku—Vassar’s first representative at the 300-student Japanese college. On February 11, 1927, she wrote,

“To the students and to the alumnae of Vassar it does not mean much that they have a sister college in the Orient. To the students here it is tremendously important that Vassar college (and here we rather think of Vassar with a capital V in all its glory) is our big sister. I sometimes wonder if your little sister would be better off if she had a more responsible Big Sister. (Smith sends $ 7,000 annually to its sister college in China).”

Unfortunately, Garnsey’s time abroad was cut short by a failed appendectomy performed while she was on vacation in the mountains of Japan. Forced to return to the United States for treatment, she arrived in San Francisco on November 3, 1927.

Returning to the U.S. in 1928, she began a job as a social worker in an Italian section of New York City, simultaneously attending the New York School of Social Work. In 1930, however, health problems again forced her to quit. She next found secretarial work in a real estate firm in Des Moines, Iowa and later she was assistant dean at the Stuart School of Fine Arts in Boston. In 1936, Garnsey returned to Vassar to work as the executive secretary of the Associated Alumnae Vassar College (AAVC), a position that she held until 1969.

Gert Garnsey was “determined to change the atmosphere of Alumnae House,” recalled one alumna in 1969, “from that of an old ladies’ home into an open house where students (future alumnae) and all other guests were welcome and felt at home.” Thus, in 1937, Garnsey and college Warden Eleanor Dodge ’25 reinterpreted the house’s statement of purpose to make it more inclusive of current students and friends of the college.

When the administration declined to create a more direct route, Garnsey saw that a path of stepping stones—called by some “Gertrude’s Folly”—was laid, directly connecting Josselyn Gate to the Alumnae House.  An even more controversial innovation, the AAVC’s acquisition in 1939 of a beer license, was followed three years later by the granting of permission to students to enjoy a cocktail in the living room or on the terrace.

In Garnsey’s 33-year tenure as executive secretary the number of registered alumnae grew from 5,600 to over 22,000. She steered both the house and the association through many a trying time, including a world war and many campus and AAVC battles. English professor—and later, trustee—Constance Dimock Ellis ’38 recalled that “being welcome at the House made a real difference in the quality of undergraduate life at Vassar during the war and it was Gert’s sympathy and imagination that made it possible. The students knew this; many gatherings ended with choruses of ‘It’s Gert who makes the world go round.’ ”

Gertrude Garnsey served also as an ambassador between the college and its graduates.  In her remarks as the 2003 recipient of the Award for Outstanding Service to Vassar College Eugenia Aiguier Havemeyer ’51 spoke of “one of Vassar’s great assets, the AAVC… In the early days of my involvement in alumnae affairs, the AAVC was presided over by the legendary Gertrude Garnsey, Class of 1926. Under Gert Garnsey, the AAVC, which had always been independent and self-governing, did all the annual fundraising for Vassar as well as ran alumnae affairs.”

Garnsey was also a motivator of the innovative “Mellon Study.” Gert’s closest college friend, her classmate Mary “Mim” Conover, married the Mellon heir, Paul Mellon, and Garnsey—the only Vassar contact Mim had maintained—collaborated with Paul Mellon in 1946, when Mim died at the age of 46, to establish the Mary Conover Mellon Foundation for the Advancement of Education at the college. The program’s meticulous and exhaustive study by professional psychologists and psychiatrists of Vassar students and graduates of “those conditions of the life of the college that contribute most to mental and emotional health” provoked considerable controversy among the college constituencies, but it came to be valued as an important, ground-breaking analysis.

Based on this work, Vassar’s Mellon Foundation also founded and funded the Mary Conover Mellon Faculty House Fellow program, which President Blanding announced in 1951, “as a result of faculty recommendation, an experiment…to be initiated in three student houses with Mary Conover Mellon House Fellows instead of the usual Residents…. The House Fellows…will have special interest in and qualifications for advising students; they will be relieved of one third of the normal teaching load and will accept certain definite responsibilities in connection with the social life of the student houses….”  An overwhelming success, the Mellon House Fellow program transformed residential life at Vassar.

At her retirement in 1969 the Gertrude Garnsey Fund for Experimental Teaching was established in her honor. She moved with long-time companion Beatrice Lindberg to the Garnsey family home on Cayuga Lake in Seneca Falls, NY.  In her retirement, Gert served on the Board of Directors of the Taylor Brown Hospital and the Seneca Falls Historical Society. She also pursued her interests of gardening, golf, and playing the piano.

William McGuire, Bollingen: An Adventure in Collecting the Past, 1982.

A Documentary Chronicle of Vassar College