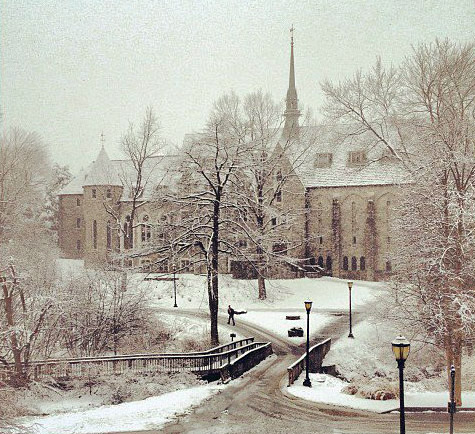 The dedication of the Belle Skinner Hall of Music on June 7, 1931, marked the end of a cramped and uncomfortable 30 years for Vassar’s music department. The college had, at its founding in 1865, appointed the first professor of music in the United States and, as early as 1868, had allowed a course in music to count towards the degree in arts. Following the decision in 1891 to close the separate Music School, it had again pioneered in offering music courses in the collegiate curriculum, but the department remained crammed into what had originally been a hay loft on the top floor of the old Calisthenium and Riding Academy, a building it shared with the classics and English departments and, after 1927, the Experimental Theatre. By the late 1920s, 20 faculty members were teaching music courses to students at Vassar, and a sizable collection of irreplaceable scores, books, and instruments was accumulating, all in a few decrepit rooms without proper sound-proofing or temperature control. With barely enough space to teach their classes and the risk of damage to the collections—from fire, extreme temperatures, and even “falling ceilings,” according to a letter written by George Coleman Gow, head of the department)—the faculty protested in vain. President James Monroe Taylor’s having acknowledged early in his presidency the need for a music building must have added to their consternation. Taylor believed strongly in “developing the aesthetic side of the college course” through a good music program, and in 1904 had gone so far as to identify a hill by Raymond Avenue—in fact, the eventual location of Skinner Hall—as an ideal site for a future music building.

Dean Ella McCaleb ’78 recalled Taylor’s writing that the proposed building “was not to be regarded ‘as the fancy of an ambitious college president but a necessary condition for doing the best work.’” Reverend Henry Sanders, a trustee from 1895 until 1921, had offered a sizable donation towards a new music building but was eventually convinced that the needs of the chemistry department were more pressing.

In November 1929 a donation of $600,000 from William Skinner, a wealthy textile manufacturer from Holyoke Massachusetts, in honor of his sister, Belle Skinner ‘87, finally put the music department’s long-awaited plans into motion. A beloved and popular student during her time at Vassar, Belle Skinner graduated as president of her senior class. In an appreciation of Miss Skinner at the time of her brother’s gift, President Henry Noble MacCracken noted that in March 1887 she had “crowned her four years of study of music” by joining Gustav Dannreuther, violinist with the New York Symphony Society and a founding member of the Dannreuther Quartet, in a “Soiree Musicale,” performing Ferdinand Reis’s Romanze from Suite for Violin and Piano.

“Music remained her first love always,” MacCracken said, adding that “with rare discrimination” Skinner began a collection of rare and antique musical instruments which she kept at “Wystariahurst,” her home in Massachusetts, “a collection in many respects unrivalled here or abroad…a unique monument of a college girl’s musical study and a woman’s life long devotion to an art.”

Another deep dedication, however, arose far from home in the years just after World War One, in Hattonchatel, a small village in a region of France that had been devastated during the war. Over a million dollars of her own money and many months working on-site went into efforts to restore the local economy and renovate the town, Working through the French government, she financed and oversaw the reconstruction of Hattonchatel, from the rebuilding of the chateau, town hall, library, and school, to the installation of a modern water system. The project included replacing an old and beloved church bell, which the grateful townspeople named for her. In recognition of her humanitarian efforts the French government bestowed upon her the Médaille de la Reconnaissance Française in 1919, and in 1920 the Consul-General of France presented her with the cross of a Chevalier of the Legion of Honor. Her time abroad led her to create a scholarship at Vassar for graduates wishing to continue their studies in a provincial French university. In 1927, Phoebe Heath ’27 was the first recipient of Skinner’s scholarship, and the two women remained lifelong friends.

Belle Skinner’s love of French culture and the lovely 16th-century Chateau d’Hattonchtel influenced, in large part, the design of the new music building. The building’s architect was college architect Charles Collens, but many of its details were conceived by Professor of Music George Sherman Dickinson who, though not a trained architect, was responsible for the whole interior layout. Reminiscent of French Medieval Gothic buildings, Skinner Hall is divided into three wings to ensure that sound from activities in one part of the building does not interrupt the goings-on in another part: the North wing is taken up almost exclusively by a recital hall seating 500; the Center wing contains offices and classrooms; and the South wing is devoted to practice rooms.

Also notable in the design of the building were a section of the third floor set aside to be a museum and the excellent music library in the South wing, named in honor of Professor Dickinson—its comprehensive holdings the only such material housed outside the college’s main library. The recital hall featured a three-manual pipe organ equipped with a “self-player attachment,” which, The Miscellany News noted, would allow for the “rendering of orchestral parts with the college string orchestra.” A light touch in Dickinson’s meticulous design was the building’s weathervane which, instead of bearing the traditional French rooster was, instead, a musical staff containing the notes G C G, in honor of his predecessor George Coleman Gow, who served in the music department for 37 years and who wrote a Vassar alma mater. The Belle Skinner Hall of Music was dedicated in on June 7, 1931, and it opened for classes the following semester.

Visiting the college in January 1932—and already anticipating the matriculation of his daughter Joan in ’42—composer and music critic Deems Taylor, the radio voice of the New York Philharmonic, appreciated both Vassar’s place in musical education and its new hall of music. “Vassar,” he wrote in The New York American, “is doing a great deal about music…. In the dear dead days when we parents went to college, an undergraduate school of music was a rarity.

Even when there was one, enrollment in it was considered as something special, an extra frill, rather than an integral part of the regular curriculum. Harvard, in 1862, Oberlin and Vassar in 1865, were the three pioneer schools of music.” Taylor found the new hall of music “impressive not only as an example of functional completeness but as a symbol of the role that music has come to play in modern higher education.”

Though much of the building’s interior today would still be recognizable to the first students who walked through its doors, a number of renovations and improvements have taken place since then. In 1981, in honor of the building’s 50th birthday, a number of changes were made to the recital hall. The seats in the recital hall were reupholstered, and the backstage area was redone and made more amenable to visiting performers with the construction of a bathroom—an addition prompted by a hectic intermission in a concert given in 1978 by the jazz pianist Eubie Blake. After finishing the first part of his program, the 95-year-old jazz legend was rushed through the overflow audience by members of the faculty to reach the sole bathroom on Skinner’s first floor.

Later changes included converting Vassar’s former radio broadcasting station on the fourth floor into a classroom and voice studio, a reorganization of the music library’s materials and the addition of a multimedia classroom behind the library.

The most noteworthy addition to Skinner in recent years is probably the organ in the recital hall. Built by the internationally-renowned craftsman Paul Fritts, the organ was installed in 2003 and caught the attention of organists around the country for its antique design. A North German-style tracker organ, the new organ bears a great resemblance to the instruments that Baroque composers would have played on over three hundred years ago, providing an excellent complement to Vassar’s more modern electro-pneumatic organ in the chapel.

However delayed in its realization and varied by innovations, Skinner Hall of Music remains true to its intention, as interpreted by President MacCracken. “Miss Belle Skinner,” he wrote, “ was keenly appreciative of color and design as well as of music…. It is our hope that to this ‘Vassar enshrined in beauty Through all the changing years’ may be added a building fittingly enshrining the art of music and the memory of a generous spirit.”

Special Thanks to Richard Wilson