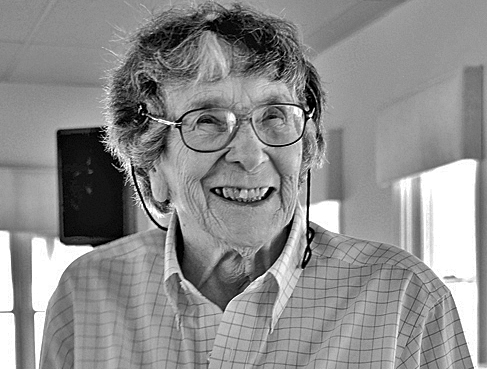 In June 1970, the editors of the Vassar Alumnae Magazine received a letter that, one might safely surmise, was like none the publication had ever received before. The letter was titled “Being Gay at Vassar,” and in it Anne MacKay ’49 declared:

“The prejudice against homosexuals will begin to lift only when lesbians speak the truth for themselves.” She went on to recall, “When I was at Vassar the silence about homosexuality was immense…. To be at gay at Vassar was to be very lonely. I know now that Vassar was a terrible and beautiful transition time for many women, but the years seemed especially poignant to me, because I knew I belonged there. I loved the college and the people with a great intensity. … I followed the gentleman’s agreement and loved everybody and they, in return, elected me president of the College Government Association. It was second best, but I was deeply pleased because I felt the affection behind the action.”

In an act of courage rare for the time, MacKay signed her name, even as she requested anonymity “…because my Friend and Longtime Companion (as they say in the obituaries) is not as liberated as I am, and the publicity would distress her. I will give my name on request and would be delighted to answer questions.”

The article was returned unpublished, with the comment that the magazine did not accept anonymous material.

Nonetheless, Anne MacKay had fired the first shot in defiance of an attitude that shrouded the very existence of lesbian, gay, bisexual or transgender people at Vassar in quiet disapproval. She went on to become an important, indeed pivotal, figure in Vassar’s LGBT history. Two decades passed before another of MacKay’s writings on the subject—appropriately called “Breaking the Silence”—finally appeared in the Vassar Quarterly. Her leadership was critical in the founding of Vassar’s first lesbian and gay alumnae/i group, LAGAVC, which held its first conference on campus in April 1991, and her foresight ensured that a rich slice of Vassar’s LGBT history would not be lost when she served as editor of Wolf Girls at Vassar: Lesbian and Gay Experiences 1930–1990 (1993), which was nominated for a Lambda Literary Award.

MacKay wrote and edited many of LAGAVC’s newsletters, helped in the creation of the Vassar AIDS Memorial Plaque that hangs in the Villard Room, and made extraordinary contributions to the library at Blegen House, now located in the LGBTQ Center in Main Building. She also became a mentor and role model for generations of Vassar students, lesbians and gay men alike.

Vital as these particular contributions to Vassar were, they reflected but one of many facets in the life of Anne MacKay. Born the eldest of three children on March 31, 1928, in New York City, MacKay attended The Dalton School, where her love for the theater, especially backstage, blossomed early ( “I was God and sound in Everyman,” she once said of her Dalton days.) From the moment she arrived at Vassar, “Ky”—a nickname that reflected the proper pronunciation of her surname—was among the busiest students on campus, and certainly one of the most organized. A primary focus of her prodigious energy was her major, drama; she variously served as head of the organizing committee, stage manager, scenery director, and just plain director for various productions of Philaletheis as well as the Ophelia Theater, a short-lived troupe in her sophomore year whose motto was “It’s bound to be As You Like It!” Years later she recalled, “I directed our Soph Party, a musical that was a feminist’s dream: The heroine loved the men presented to her, then said, ‘Thanks, but I want to wait and be a scientist first!’” She also helped organize a duel regatta between the Vassar Corinthian Yacht Club and Dartmouth, worked on an ad hoc student-faculty committee that addressed accessibility for all students to needed reference books and found time to write articles for both the Miscellany News and the Vassar Chronicle. Small wonder that she was subsequently elected vice president and then, as she noted, president of the College Government Association.

No less as an alumna than as a student, “Ky” was a beloved figure to her Class of 1949 and the closely associated Class of 1948, working tirelessly for her class and in particular on their reunion showcases, which duplicated some of her student successes by featuring lively, and occasionally bawdy, original songs. She emerged as a sort of unofficial mayor of Orient, Long Island, a quaint North Fork hamlet that her family had frequented summers while she was growing up, and which has long included a vibrant lesbian community. In addition, she was an experienced sailor, fisher and crabber, an enthusiastic science fiction fan, a devotee of traditional American music, a poet and director and, well beyond the walls of Vassar, a pioneering lesbian activist.

Late in life, MacKay wrote of her time at Vassar: “If you realized you loved women you lived in deep silence. ‘Gay’ hadn’t been invented then, I knew no one else like me, and there was no one to talk to.” But by breaking that silence, she had helped to give voice to many others who followed her in reclaiming Vassar’s LGBT history. And MacKay lived to see her significance to her alma mater publicly acknowledged: in 2011, an excerpt from Wolf Girls was included in all performances of the traveling official Sesquicentennial play Vassar Voices, and she was feted on campus at a program leading up to the Smashing History conference. She died on April 26, 2012 in her beloved Orient, where the local newspaper proclaimed her “a force of nature.”