In retirement in San Jose, California, in 1895 Dr. Alida Cornelia Avery, one of Vassar’s first two women to serve on the faculty, recalled the college’s opening days in the Los Angeles Herald.

It seems a far cry from the Vassar field day on November 9, 1895, to the December days of 1865, when President Raymond and the women of the faculty and the prospective teacher of Calisthenics were wrestling with the problem of the proper length of skirt for gymnastic suits. The president’s eldest daughter, charmingly docile and with a keen sense of humor, made a capital lay figure upon which to test the practical illustrations of our various ideas of fitness. After much measuring, trying on and discussion, the compromise to eight inches from the floor was effected between the just below-the-knee and just–above–the–boot–top advocates. Venerable traditions had already suffered so great a shock in the opening far-reaching reflex influences of Vassar and its successors in the higher education in the incomparable improvement in preparatory schools, where few subjects are taught, but with breadth and depth of thoroughness.

To classify such numbers of students with such diversified acquirements was a long and difficult process, but it went steadily n under the kind, myopic eyes of the patient president, until the wholly unprepared were sifted out. For the most advanced a quartet of courses was arranged so supplementing their previous work that they credibly took the baccalaureate degree in June, ’67, while the great majority between these small extremes gradually became busy with well-appointed lines. 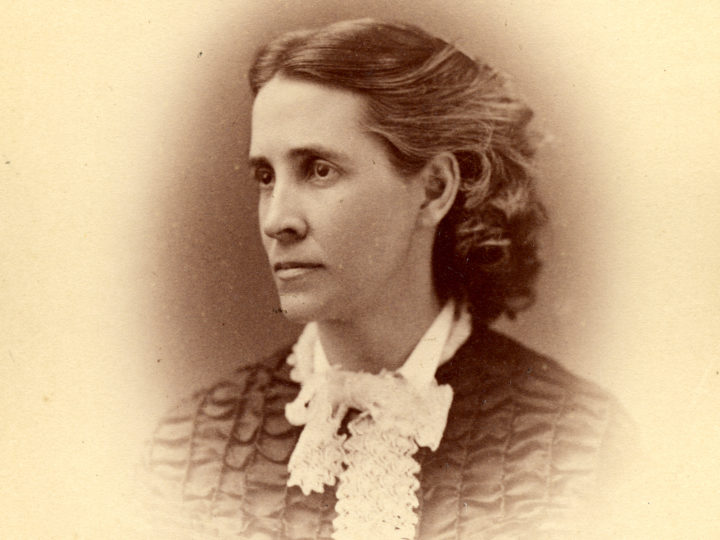 One of the tasks to which Miss Hannah W. Lyman, the first lady principal, addressed herself during the summer of 1865 was the assigning of rooms. These are mostly in suites of parlor and three-bed chambers, and there were many double beds in those days to applicants for entrance. The scheme for this was based upon the alphabetical list of her numerous and universally unknown correspondents; hence it came about that Glass and Glaziers formed a friendship with no flaw nor break; Hawkes and Herons were peaceful chums; Large and Little made no odious comparisons; Monks and Nuns hobnobbed without provoking scandal; and so on from A to Z.

The general harmony of that immense household of strangers brought into such artificial and intimate relations, and often in considerable discomfort, is to me a delightful remembrance illustrating as it does the common sense, the kindness, the tact of the average young woman. I know that it strengthened dear old Matthew Vassar’s belief that she was altogether worthy of the culture to whose mitiative [sic] he had dedicated his fortune and for which he breathed his loftiest aspirations.

Maria Mitchell, daughter of William Mitchell of Nantucket, professor of astronomy, was the only person in the faculty who had more than a local reputation—her fame extended wherever a telescope was reading starry secrets—but she was only a woman, and agreeable to immemorable usage the salary offered and accepted by her was less than half that paid to the young and comparatively unknown men selected for the professorships. Her Quaker training in the equal rights of the sexes inspired her to protest to the board of trustees against this unjust discrimination, I which protest she was joined by the resident physician; perhaps their most gratifying memory of Vassar days in their thus standing together for principle—a union of purpose which first gave women fair play in the country’s first woman’s college, and established it for all time.

Reminiscences crowd—I fear I have already passed beyond the space allotted them. If any reader wishes a more comprehensive view of early Vassar, let her send for Vassar Miscellany, May, ’95 edition, which contains the address given on Founder’s day by Prof. Mary W. Whitney (Maria Mitchell’s pupil and successor), of the famous class of ’68, “but that is another story.”