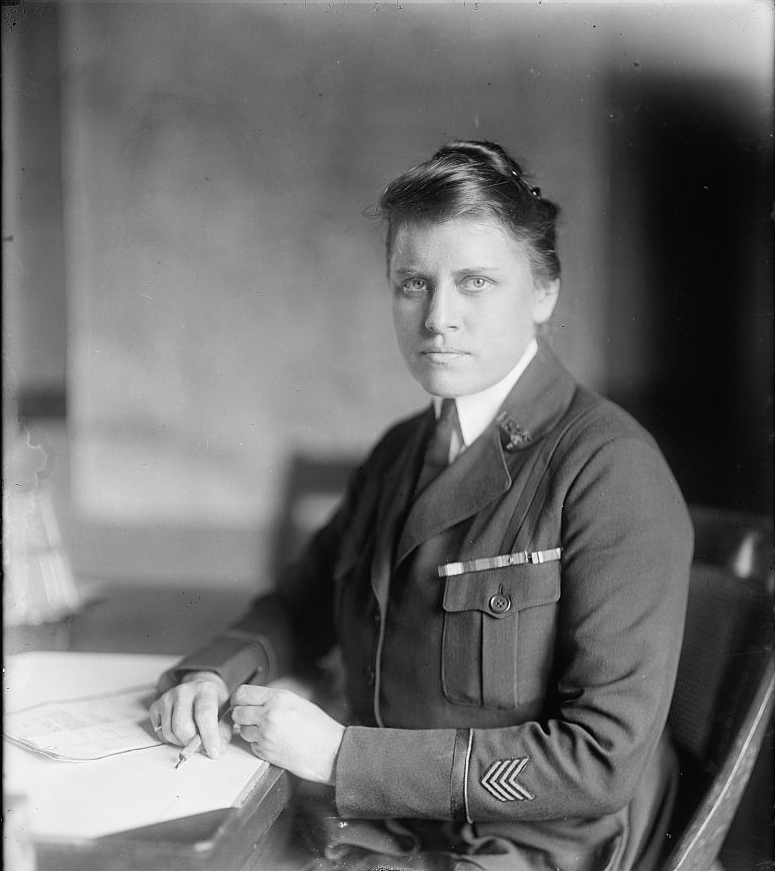 Colonel Julia Catherine Stimson ’01, the head of Nursing Service of the American Expeditionary Forces during World War I, was born in Worcester, Massachusetts, on May 26, 1881, the daughter of Dr. Rev. Henry A. Stimson and Alice Wheaton Bartlett Stimson. The second of seven children, Julia was a member of a particularly distinguished and public-service oriented family. Her uncle, Dr. Lewis Stimson, was involved in the founding of Cornell University Medical College. Her cousin Henry L. Stimson served as secretary of war and secretary of state and her youngest sister, Barbara Stimson ’19, a path-breaking orthopedic surgeon, served as a major in the Royal Army Medical Corps during World War II.

The family moved to St. Louis when Julia was five, and Rev. Stimson was appointed pastor of the Pilgrim Congregational Church. When the family relocated to New York seven years later, Julia attended the Brearley School. “When we moved to New York,” Barbara Stimson recalled, “[father] entered my two oldest sisters in a ‘fancy’ girls school and insisted they be taught Greek. The school had to hire a special Greek professor for the purpose. It was a new idea but father felt that if his sons were to be taught Greek, his daughters should be too.”

At the age of sixteen, Julia Stimson was admitted to Vassar, which was subsequently attended by her four sisters: Alice Stimson Smith ’01; Lucille Stimson Harvey ’04; Dorothy Stimson ’12 and Barbara Stimson ’19. At graduation, Julia wished to become a physician, but her parents and her uncle Dr. Lewis Stimson discouraged her from entering the male-dominated world of medicine.

After being hospitalized for a skin condition in 1903, Stimson met Annie Warburton Goodrich, the head of the New York Hospital Training School, a nursing school. Upon her recovery, Stimson enrolled in the New York Hospital Training School, graduating in 1908, and becoming supervisor of nurses at Harlem Hospital between 1908 and 1911. Her first book, The Nurses Handbook of Drugs and Solution, was published in 1910 by Whitcomb and Barrows in Boston.

In 1911, Stimson became the head of social service at Washington University Medical School in St. Louis, later becoming superintendent of the Training School for Nurses at Barnes Hospital and the St. Louis Children’s Hospital, where she also headed the administration of social service. Stimson also pursued her master’s degree in sociology from Washington University in Saint Louis, receiving it in 1917.

With the United States’ entrance into World War I in April 1917, Stimson volunteered and became chief nurse at Base Hospital #21 at Barnes Hospital in St. Louis. While there she gathered a group of nurses with which to travel to France and subsequently set sail on May 19, 1917 to serve as chief nurse of Base Hospital #21 of the Washington University Unit in Rouen, France. In the final days before departure from St. Louis, Stimson wrote to her parents:

Aside from what we think about the causes and principles involved, and the tremendous satisfaction of having a chance to help work them out, to be in the front ranks in this most dramatic event that ever was staged, and to be in the first group of women ever called out for duty with the United States Army, and in the first part of the army ever sent off on an expeditionary affair of this sort, is all too much good fortune for any one person like me.

Her father compiled a collection of her letters home during the war and published them in 1918 as Finding Themselves: the Letters of an American Army Chief Nurse in a British Hospital in France, the title inspired by Base Hospital #21 physician Dr. Borden Veeder’s December 1917 letter to his wife, in which he wrote: “Julia is as usual . . . running her department in a splendid way. The nurses have a fine spirit and are very happy as a whole under conditions which are definitely masculine and not adapted to women. . . . The spirit of the unit is really wonderful. . . . It is most interesting watching people finding themselves.”

Returning to United States in 1919, at the end of the war, Stimson was appointed acting superintendent of the Army Nurse Corps and dean of the Army School of Nursing, an appointment which became permanent on December 30, 1919. The amended Defense Act of June 4, 1920, awarded her the relative rank of major, making her the first and only woman at that rank at the time. Stimson also traveled to Cannes, France in 1919, as a United States delegate to the International Red Cross Conference there.

Stimson served as the superintendent of the Army Nurse Corps from 1919 until 1937, and upon her retirement in 1937, was president of the American Nurses’ Association from 1938 until 1944. She also served as chairman of Nursing Council on National Defense. In 1942, during World War II, Stimson was recalled to active duty to recruit women for the Army Nurse Corps. In August 1948, only six weeks before her death, Stimson was awarded the rank of colonel. Stimson died at St. Francis Hospital, Poughkeepsie, in September 1948 at the age of sixty-seven.

In 1976, the American Nursing Association inducted Colonel Julia Stimson into its Bicentennial Hall of Fame.