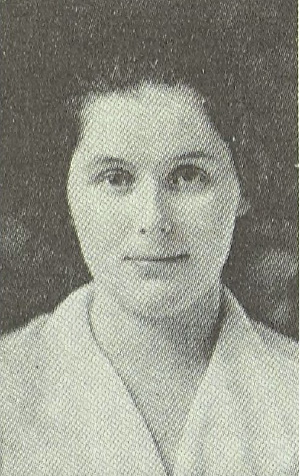 At Vassar, Julia Coburn Antolini ’18 was known as much for her dedicated work as editor-in-chief of the Miscellany News as she was for her lighthearted practical jokes—on professors and then-president Henry Noble MacCracken. Her playful attitude as well as her reputation for outspoken journalistic rigor, sometimes used in critiquing the college, eventually earned her the nickname, “Julie the unruly,” from the president.

Julia was born in Kansas City, Missouri, on August 11, 1896, the daughter of a cattle dealer, James Mitchell Coburn, and his wife, Mary. Entering Vassar with the Class of 1918, she became an English major, active in the Miscellany News—editor-in-chief between mid-April 1917 and in her graduation. Also involved in the college’s thespian activity, she wrote in the Misc about her time in Gertrude Buck’s innovative dramatics class, the origin of Miss Buck’s Vassar Dramatic Workshop. The counterpart to Harvard’s drama workshop, the workshop developed into Vassar’s renowned Experimental Theatre.

Interviewed in 1980 by Elizabeth Daniels ’41 at the summer home she and her husband built on Vassar Lake in 1961 as an eventual gift to the college, Julia recalled her first meeting, as editor-in-chief, with President MacCracken. “Prexy” learned that the chair of the art department had scolded her for publishing a student complaint about the department. MacCracken told her, she said, “he thought the professor would like an apology from me. I said to Prexy I would like an apology from him. I heard no more about it, except that Prexy very wisely said to me, ‘You have freedom of the press, of course; you can publish anything you want to, but just remember that there are great many alumnae at the college who get the Miscellany News who judge what’s going on by that. Do you want all of them thinking that some department of the College is going haywire?’ It was a good lesson for me.” Julia credited this incident for what was to become an extraordinary career in journalism, public relations, fashion and education—along with her weekly half-hour appointments with the president, where, she said, they exchanged “extremely valuable ideas for articles, for features, for things that were projected or planned.”

Prexy’s appreciation of Julia Coburn was reflected in her first job after her graduation, on the editorial board of the Junior Red Cross, founded in 1917, of which MacCracken had been the first director. Having earlier joined her English professor, Burges Johnson, in a comic prank on MacCracken, Julia understood Prexy’s evaluation to her “new boss”: “This is Julia Coburn. Her sense of humor leads her into terrible things.” After listening, years earlier, to a Chapel speech in which MacCracken had jokingly deplored the abundance of campus dandelions (wishing for students to “go out and extirpate dandelions”), Julia and Professor Johnson had done just that. They had mailed Prexy a package of unearthed dandelions, soil and roots still attached as if freshly, brutally, hoed out.

Games aside, Julia’s relationship with her teachers was one of grateful mentorship. The founder of Vassar’s publication office, Burges Johnson was also, as Julia recalled, “a publishing journalist who took us, literally, into the journalistic world. . . and gave us just a totally different approach to writing.”

In 1922 Julia became the head of the advertising department at the prominent Ohio department store chain, Lasalle & Koch. She returned to Vassar to speak about her career at a Vocational Conference, the first of many of her appearances on campus.

In 1930, having become the promotion director of Harper’s Bazaar in 1927, Coburn joined a group of eminent women, including Elizabeth Arden, Eleanor Roosevelt, Helena Rubinstein, Edith Head, Lilly Daché and Clare MacCardell, to form Fashion Group International. FGI, led by Vogue Editor-In-Chief Edna Woolman Chase, quickly became a revered international organization of the fashion and design trades, world famous for its fashion archives. By 1935 the fashion editor of the Ladies’ Home Journal, Julia continued to write frequently for Vassar Quarterly. An article in 1937 wondered “How Are the Intelligentsia to Look?” and in this “cheerful plea to abandon a superior attitude toward clothing,” she noted “it is no longer a reflection upon your intellect to be well-dressed.”

In the same year, she founded the Tobé-Coburn School for Fashion Careers with sister FGI fashion authority and writer Tobé Coller Davis. The institute, located in Rockefeller Center, represented an innovative development in women’s fashion in New York City’s emerging fashion industry. With faculty in English, economics, history, psychology as well as journalism and advertising, the new school and its novel concept were a lively success. After a visit to the school with Vassar students in 1937, a student reported: “at a beautifully appointed luncheon in the Rainbow Room, Miss Coburn explained to the visitors that the School of Fashion Careers is the first professional school in the world organized to meet the need of specialized training for executive positions in the fashion field. . . .

The interest in the school is evidenced by its enrollment of 73 students in this, its first year. . . . The students are at least twenty-one years of age, and graduates of colleges, junior colleges, or art schools. The school offers night courses which are open to men as well as women. . . . Miss Coburn remarked that a liberal arts course in college, to give the student a wide cultural background, was a far better preparation than specialized art studies for a career in fashion.”

In 1939 Coburn and Davis announced scholarships for Vassar students at their fashion school, and in 1940 they invited potential learners to an open house. “Students interested in fashions and retail work from any angle,” the Miscellany News reported, “are invited to come and bring their friends”. In 1942 five scholarships at Tobé Coburn were made available to Vassar students. Nearly two decades after the school’s opening, an introduction to an article by Julia in Vassar Quarterly in 1956, “Help Yourself to a Job,” noted that it had already “helped about 1400 young women to get their first long-range job.” The article, one among many written by her in decades after graduation and during her time on the publication’s editorial board, also reflected her longtime engagement with the college. She served on the board of directors of the alumnae association, and between 1922 and the late 1950s, spoke at Vassar more than a dozen times on fashion and vocational opportunities, singly or in panel discussions.

In 1953, Julia Coburn married Dante Antolini, a native of Florence, Italy, and the founder of Antolini and Company, a New York company formed in 1906 as a representative for Italian food manufacturers, whose wife had died the previous year and who had three sons and six grandchildren. In 1966, as an eighty-seventh birthday gift to her Florentine-American husband, she endowed at Vassar the Dante Antolini chair of Italian Letters.

Julia Coburn Antolini died on February 6, 1981 at the age of eighty-four.

Elizabeth A. Daniels, “The MacCracken Tapes: Probing the Past for Prexy,” Vassar Quarterly, vol. LXXVII, no. 4, September 1, 1981.