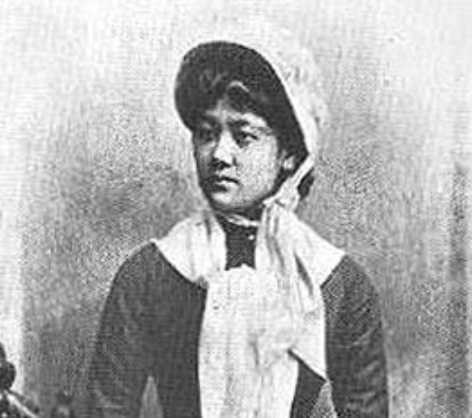 One of the class of 1882’s most vibrant members was also the first Japanese woman to receive a college degree. Sutematsu Yamakawa (known to her Vassar friends as “Stematz”) came to the United States in 1872 with four other young Japanese girls. They traveled as part of the Iwakura Mission, a group of a hundred statesmen and male students sent by the Japanese government to study Western ideas on everything from politics, finance and legal systems to weapons technology. With the “opening of Japan” by Commodore Matthew Perry in the 1850s, the Japanese of the Meiji Era were coming out of a centuries-long period of isolationism and were eager to explore Western ways of thought and education.

Arinori Mori, the Japanese chargé d’affaires in Washington, endorsed the idea of sending a few young girls to be educated in America. Traditional education for the daughters of the samurai class consisted of writing and arithmetic sufficient to manage household accounts, and instruction in Confucian principles to prepare them to be proper wives and mothers. Mori and other Meiji statesmen believed that Western-educated women might help with Japan’s drive toward modernization.

Sutematsu’s selection for this imperial mission was curious, considering her family’s relationship to the emperor of Japan. She came from a samurai family who were vassals to the Prince of Aizu , one of the last to surrender to imperial forces in the mid-nineteenth century civil war which ended the shogun’s reign and restored the emperor to power. In 1868, eight year-old Sutematsu and her family were involved in the siege of Wakamatsu, during which the women and children supported the war effort from within the castle while the men battled the imperial warriors outside the castle walls. Sutematsu’s future husband, General Ōyama, who was part of the imperial forces during that battle, later liked to joke that the shell that hit him during that battle was made by Sutematsu herself.

At the age of eleven, Sutematsu was selected as, in her own words, “one of the two most promising girl-students in Japan, to be sent at government expense to America, there to be educated in Western languages and ways.” She remained in the country until her graduation from Vassar in 1882.

Of the five girls who arrived in America in 1872, the two oldest were sent home shortly, complaining of homesickness, and three were left: Sutematsu Yamakawa, Shige Nagai, and Ume Tsuda. Sutematsu and Shige both went to live in Connecticut, Shige with Dr. J.S.C. Abbott, and Sutematsu with Dr. Leonard Bacon, an antislavery activist and Congregational minister. It was probably through his influence that Sutematsu converted to Christianity. Sutematsu and Shige were friends throughout their childhood, and both arrived at Vassar in the fall of 1878, Sutematsu to the regular college, and Shige to the School of Music. They met regularly during their Vassar years and continued their friendship after their return to Japan.

It is difficult to say what Sutemasu’s feelings about America and Japan were. Her classmates never observed her to be unhappy, though she was somewhat distant. Several classmates claimed that she and Shige practiced their native language frequently, but she herself wrote in an essay on her return to Japan that she had nearly forgotten her Japanese and took several months to recover the spoken language. She never regained fluent literacy in her mother tongue. She also communicated with a sister at the Japanese embassy in Russia, though those letters were in French.

After graduation, Sutematsu went to New Haven to attend nursing school for the summer before returning to Japan. Frustrated by the lack of professional opportunities for women upon her return to her homeland, she decided to accept the marriage proposal of Count Iwao Ōyama, Japanese Minister of War. They married in a private Japanese ceremony on November 8, 1883, and gave a public Western-style ball in celebration on December 12 of that year. After her return to Japan in 1882, Sutematsu continued a lifelong correspondence with her foster-sister, Alice Bacon, one of the only friends—other than Shige and Ume Tsuda—with whom she could share her inner struggle in English. Along with three daughters from her husband’s first marriage, she raised three children of her own: a daughter, Hisako (Baroness Ida), and two sons, Takashi and Kashiwa.

During the Russo-Japanese War of 1904-05, Sutematsu busied herself with relief work as a volunteer nurse for the Japan Red Cross Ladies’ Volunteer Nursing Association and the Ladies’ Patriotic Association. She kept Alice Bacon and other American friends informed of the war’s progress, though her husband, now commander-in-chief of the Japanese forces in Manchuria, was concerned that she would reveal military secrets.

The Princess was also a passionate supporter of women’s education. She was a member of the planning committee for the Peeresses’ School in Tokyo, where her old friend, Ume Tsuda, became an English teacher, and her foster-sister Alice Bacon taught for one year. Tsuda, who studied at Bryn Mawr College, later founded the Women’s English Institute in 1900 with support from Sutematsu and Alice Bacon. That school would become Tsuda College, one of the most prominent women’s colleges in Japan today.

Princess Ōyama died in February of 1919 of pneumonia as a result of influenza. After her death, Shige Nagai (Baroness Uriu) donated one of the Princess’s court dresses, which had been given to her as a gift, to Vassar. The dress, along with two silver vases sent by the Japanese government to Vassar as a thanks for educating their young women, was used to decorate a room in the Alumnae house donated by the Class of 1882 in Princess Ōyama’s memory.[1]

1.) The room was dismantled in 1959 and the dress donated to the Japan Society of New York City.

Obituary for the Princess Oyama, The Japanese Advertiser, February 20 1919