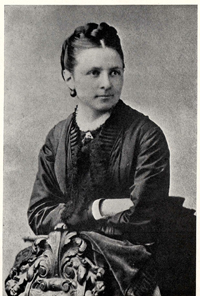 Born on April 24, 1853, Florence Maria Cushing was the first of the five children of Boston merchant Hayward Pierce Cushing and his wife, Harriet Maria Pierce Cushing, and also the first of the three Cushing sisters to graduate from Vassar.  Jennie Cushing graduated in the Class of 1880, and Ida in 1883. Graduating in 1874, however, Florence foreshadowed a special engagement with her college when—according to the Boston Daily Globe—she “delivered not only gracefully but forcibly,” the class’s valedictory address. Mary Thaw Thompson ‘77—the donor, in 1906, of Vassar’s Frederic Ferris Thompson Memorial Library—recalled Florence Cushing’s valedictory address:  “Miss Cushing swept about the platform addressing farewells to the authorities. Facing the audience, her closing words were those dearest to her in life. Erect, with sparkling eyes, her voice rose to thrill us with ‘The old Commonwealth of Massachusetts’. In that early New England spirit of frugality, physical leanness, intellectual abundance, Vassar felt her first touchstone.” Vassar’s 1874 valedictorian returned that fall to become a librarian at the college, a position she held for two years.

In a life dedicated to improving women’s education, much of Florence Cushing’s attention and energy went to academic improvement for women as well as to strengthening her alma mater. Secretary, in 1876, to the Massachusetts Society for the University Education of Women, in the 1880’s she helped Marion Talbot and Ellen Swallow Richards ’70 in founding the Association of Collegiate Alumnae, now known as the American Association of University Women. Twice the association’s president, she, along with Miss Talbot and the author and philanthropist Annie Adams Fields, was  instrumental in establishing the Girls’ Latin School of Boston, the first Boston institution dedicated to preparing girls for higher education. She was also a founding or early member of the Massachusetts Society for the University Education of Women, the Women’s Education Association, the Nantucket Maria Mitchell Association, and the Society for Promoting Scientific Research among Women. Mary Thompson recalled Miss Cushing’s demeanor at a meeting of that Society: ” Frail, indomitable, never vague or uncertain, Miss Cushing gave her decisions at the business meeting, surrounded by a distinguished company, chiefly presidents and deans of the womens’ colleges. . . .That clear, even voice still echoes in Vassar ears. What does it say? Economy, restraint, intellectual abundance, the beauty of service.”

Having led, in 1883, the alumnae criticism of Vassar President Samuel Caldwell that led to his resignation the following year, Cushing assumed a new kind of leadership with his successor, James Monroe Taylor. The first Vassar graduate to serve, in 1877, on the board of trustees, she held the position until 1893 and joined again from 1906 until 1912, when the board elected her to life membership. Resigning in 1923, she received the title of trustee emerita. During her trusteeship, Cushing served on the board’s executive committee and the committee on faculty and studies. Her friend and colleague, Christel Wilkins ’00, in a commemoration in the Vassar Alumnae Quarterly, praised Cushing’s “unfailing energy, indomitable courage, and singleness of purpose,”  adding that “her judgment and advice were sought whenever the welfare of the college or the students was in question.” Instrumental in raising funds to build the New England Building in 1901, she was also responsible for securing the piece of Plymouth Rock that hovers over its entrance. She and her  friend Elizabeth Houghton ’73 founded the Raymond Reading Room in what had been President John Howard Raymond’s library in Main Building, a place described by a student, decades later, as “a place well provided with books, and this room, so happy a memorial of a president himself a great book lover, is one of the most delightful places for readng.” During the planning, in 1911, of Josselyn House, Cushing worked tirelessly to obtain books for its shelves.

In 1927 the trustees voted to name a new dormitory Cushing Hall in Florence Cushing’s honor. In a letter to the board she stated, “I simply cannot believe it, for I know how absolutely undeserved it all is. I must have been unconscious many times in those forty years! I must believe it, however, for you have said it, and I accept the high privilege as graciously as I can.” Cushing explained, “It is because of my gratitude for Dr. Taylor’s courage and the Trustees’ willingness to follow that I am content to have the building bear the name of the alumna trustee first selected.

Florence Cushing died on the twentieth of September, 1927. Christel Wilkins declared, “Vassar College has lost one of its most loyal and devoted friends, one who gave constantly of her time and strength to the welfare of every phase of the college life”.  In November 1927 Elizabeth Houghton established the Florence M. Cushing Fund for the Encouragement of Cultural Reading. The Cushing Fund served for many years for both the upkeep of the Raymond Reading Room and the development, in subsequent years, of a program suppling reading material to all residence halls, another “phase of the college life.”