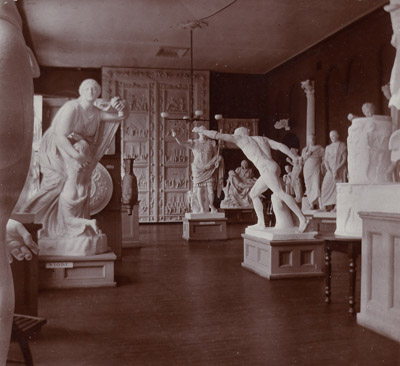 Early in the establishment of their new college, Vassar’s Board of Trustees decided to purchase copies and casts of great works of art. In 1862, the Executive Committee approved the acquisition of copies of paintings, and in April of that year, on a tour of foreign educational institutions, President Milo P. Jewett commissioned copies of Carlo Dolci’s “Madonna and Child”, Guercino’s “The Incredulity of St. Thomas”, and Raphael’s “The Madonna of Foligno” from an American painter living in Rome, Emma Church.

Vassar College’s first Professor of Art, Henry Van Ingen, introduced the idea of purchasing plaster casts to Vassar. His proposal was read aloud at the October 5th 1866 meeting of the Executive Committee, and it was “Resolved that Messrs. Lossing, Swan, and Farrar be a special committee to consider and report upon the best methods and regulations to be adopted for the preservation and use of the Art Gallery and its Library.” By the next year casts were already on order. With each yearly report to the trustees, Van Ingen added a few more necessary items to his cast collection, which would eventually number over 150 objects.

Most of the casts were apparently purchased from firms in Europe such as A. Vanni of Frankfurt and the Brucciani firm of London. Although numerous American firms sold many of the casts the college sought, purchasing the casts in Europe could perhaps argue a greater sense of authenticity for the copy. The subjects of the casts represented Van Ingen’s own tastes, as well as those of the time. Thus, a majority of the casts presented the great works of ancient art, busts of the great thinkers of the antiquity, and representations of the major Greek and Roman gods. Most of the works were full size, a significant consideration when it came to large sculptures such as the “Apollo Belvedere” or the “Nike of Samothrace.” The “Gates of Paradise” by Lorenzo Ghiberti were notable in his purchases not only for their size, but because they were one of only a handful of casts representing the Renaissance.

The uses of the casts ranged from the teaching of art history and studio art to the general edification of the students. A later president, Henry Noble MacCracken, reported that Van Ingen hoped that the casts would teach Vassar students the “correct idea of the high merits of these ancient works,” but Van Ingen’s cast purchases also had more pragmatic purposes. Van Ingen purchased architectural details so that his students could be taught the difference between German and French Gothic or the Doric and Ionic modes without ever leaving their classrooms in Main Building, and he made use of the casts in the creation of new art. As he explained to the trustees, a student of Van Ingen draws “plain objects and proceeds to drawing from plaster casts of hands, feet, and other fragments till the student finely masters the difficult forms of the head and the entire antique statue.” After the absorption of the School of Art and Music into the college in 1892, he often lamented the lack of interest from students in drawing classes, although enthusiasm for art history lectures increased.

Van Ingen also hoped that the casts would be a “beautiful beginning on which to build up an Art Museum, which will illustrate the History of Art.” After Van Ingen’s art history lectures (classes he added to the curriculum), students could visit the casts collection. Originally housed in the Art Gallery at the top of Main Building, in 1875 the casts moved to the renovated Calisthenium and Riding Academy, renamed the Museum, where they remained in the “Hall of Casts” for the rest of Van Ingen’s life.

On Van Ingen’s death in 1898, Lewis E. Pilcher took over as head of the Department of Art and began to modernize it. Pilcher wrote to the trustees that he did not desire paintings or “sculptural casts,” preferring to use the money for “the buying of a consulting photograph library,” presumably a collection of photographs of works of art. Yet, despite his modernity, Pilcher apparently felt that the traditional system of casts still held a certain appeal. In 1904 he was granted $1,040 to purchase casts, the last known purchase of casts for Vassar. His choice of more archaic works of art shows grounding in tradition, but his addition of more Renaissance works shows the changing tastes of the time.

Oliver S. Tonks succeeded Pilcher. His 33 year tenure instituted changes that neither Van Ingen nor Pilcher could have envisioned. A Princeton graduate, he brought to Vassar the preceptorial method that remains the foundation of Art 105/106 conference sections. He reinstituted studio art classes, taught by Clarence K. Chatterton, and created a place for a professor of “History and Criticism.” In 1915, the entire Art Department—casts included—moved to the newly built Taylor Hall. In his memoir The Hickory Limb, President MacCracken recalled driving through the gate in December of 1914 and seeing the casts lined up in the snow in a “sad prophetic procession”—in retrospect, a strange prophecy. By April 1924, discussion of the removing and dispersing the cast collection had begun. Tonks’s modernization was at odds with a space filled with plaster casts, some of which were nearly fifty years old. An “informal inventory of the plaster casts now in the basement of Taylor Hall underneath the lecture room,” requested by MacCracken on December 2nd, 1935, disclosed that between 1924 and 1935, an unknown number of casts were moved from the gallery space into this basement, effectively ending their days as both works of art and teaching tools.

The dispersal of the collection accelerated during the tenure of Agnes Rindge Claflin, Chair of the Department of Art after Tonks’s retirement in 1944. A Radcliffe graduate who bore no great love for the cast collection, Claflin sensed this was a time to innovate, to bring Vassar up to speed with its peer institutions. In 1949, discussing her plans and achievements in the Vassar Alumnae Quarterly, she made pointed references to founding trustee Elias Magoon’s “Report of the Committee of Art,” written in 1864. Both Magoon and Claflin discouraged an attachment to copies as teaching tools. She mentions only the Ghiberti Doors as still remaining in Taylor Hall, adding that “[t]he space given to the plaster casts was taken over for an annual program of loan exhibitions designed to supplement the permanent collection and to give more opportunity to study contemporary art…. Most of the collection of casts may still be seen, though rather dimly, by those intrepid enough to penetrate the basement of the Chapel.”

A series of memos recount the final removal of the casts. The janitors were instructed, in an account of the tagging of certain casts in 1954, to leave the tagged ones alone but to “destroy or otherwise dispose of the old statue bases, castings, etc.” Memos written four years later, seeking additional storage space for the library and space for the choir and raising the issue of casts in the Chapel basement call into question whether the earlier instructions were carried out. After conferring with the department as a whole, Claflin agreed to free up the space: “I have asked members of the Department to look again to give a ‘release’ on them. The verdict is demolition. We made a few inquiries at the time of the first disposal to see if they might be useful in other departments or public schools, but received no response. We would like, then, to send in a job ticket for their final demise.”

The casts apparently survived for another year, and they gained two friends in Lois and Harvey Dinnerstein. On April 29th, 1959, Claflin “was surprised to hear that our casts had not yet been cast off. Since it is V.C. money in any case, I suppose it matters not who writes the job ticket—but I thought we were clear of it when we gave up all claim—and they are now in the Chapel basement. Our Mr. and Mrs. Dinnerstein say they want some of them! If they cart them away is that ‘within the law’? These miscellaneous matters are so infrequent that I cannot remember all the policy involved.” On May 6th, Louis Brega, the college’s manager, and Claflin agreed to sell certain casts to the Dinnersteins at almost no cost. Almost all of the remaining casts were presumably chopped up for lime.

A few pieces of the collection were left on campus after Claflin’s purge—and a few may still be hidden away in a closet or office. The most impressive survivor is the cast of Ghiberti’s “Gates of Paradise” from the east doors of The Baptistry in Florence. Installed in the main staircase of Taylor Hall when it opened in 1915, it was given a lacquer coating which attempted to mimic the bronze of the original door. The size of the cast, and its firm grip on the wall, saved it from destruction over the years. Donatello’s “Saint George” also survived, although its niche was destroyed. Currently in the stairwell of the Jade Room in Taylor Hall, it is often visited by curious Art 105 classes. A number of casts of architectural details have also made it to the present day. The pieces are included in Van Ingen’s 1894 inventory, and archival photos show that in the late 1940’s they hung on the wall of the architectural drawing studio at the top of Taylor. The casts were restored during the recent renovation of Taylor Hall and currently hang in Taylor Hall 206. Two casts have found a home in the Art Department conference room. One is listed in the 1894 inventory as a “Roman Personification of Cities”. Another appears to be a Maenad cast, also from the 1894 inventory. The weight and technique of two additional casts in storage in the Frances Lehman Loeb Art Center, a polychromed cast of Donatello’s “Niccolo da Uzzano”and one of Pollaiuolo’s “Bust of Youth,” suggest that both date from the early twentieth century.

This research was taken in part from a Ford Scholar project completed under the direction of Jacqueline Marie Musacchio of the Department of Art.